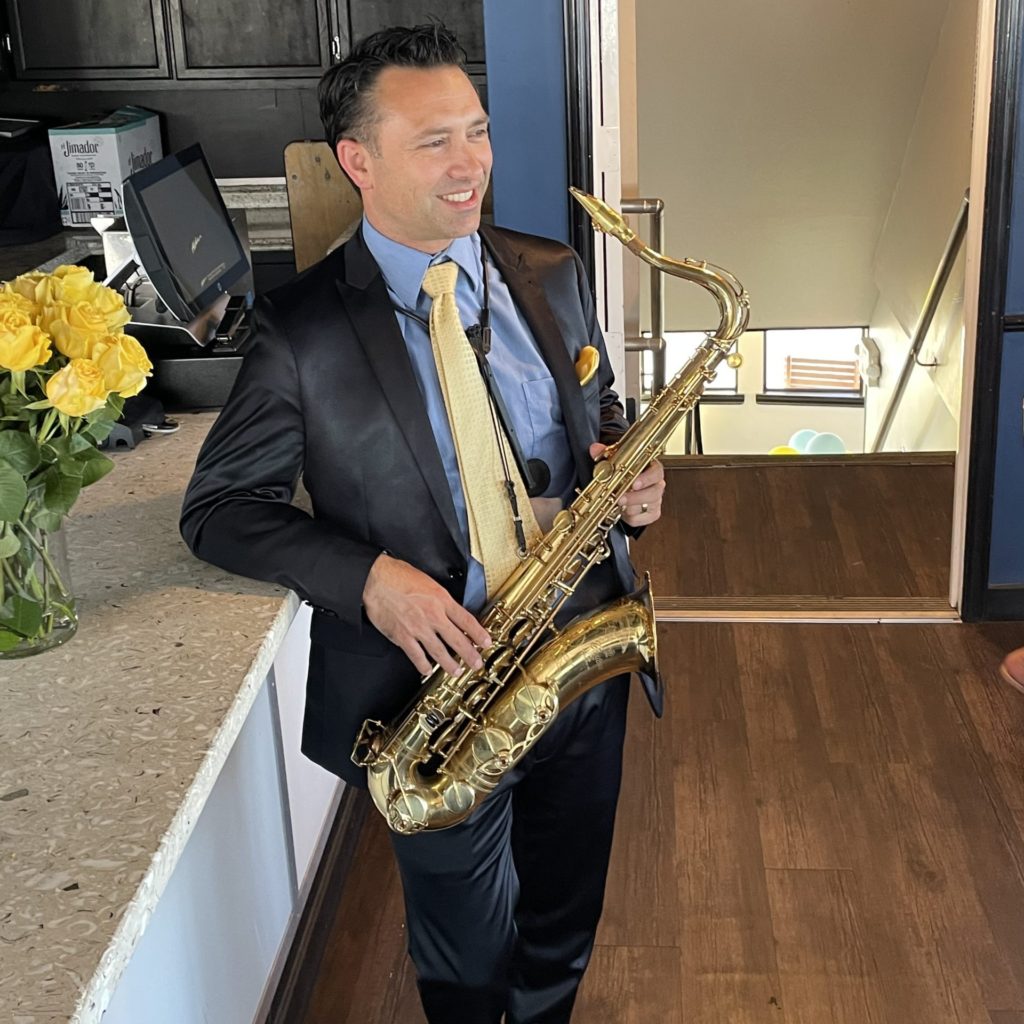 A freelance saxophonist and born showman, Kevin “The Maestro” DelMastro travels the world performing at parties, events, and weddings as a solo artist or a feature with DJs and bands. The highest rated saxophonist in San Diego on Yelp, Google, and WeddingWire, he thrills audiences with electrifying solos, romantic ballads, upbeat pop music covers and passionate performances. His unique pop style has very broad appeal. Originally from Connecticut, where he began sax at age 9, Kevin has lived in San Diego over 20 years and made a name for himself in Southern California. He’s been hired to play at UC San Diego, San Diego International Airport, Hotel del Coronado, the Manchester Grand Hyatt, Jamul Casino, San Diego Convention Center, Marriott Marquis, Humphrey’s, House of Blues, Music Box, Hyatt Regency La Jolla, La Valencia, The University Club, Marina Village, The Observatory, as well as countless backyards, restaurants and beaches. A former dance teacher and performer, you’ll often find him on the dance floor, bringing the show right to the audience for a truly memorable, unique experience. He will work with you to find out exactly what your ideal performance would look like, whether it’s audience engagement with Kevin’s big sound and personality or just blending in with background jazz music.

Favorite songs to play live:
What a Wonderful World by Louis Armstrong, Perfect by Ed Sheeran, Stand by Me by Prince Royce (bachata version), Forever in Love by Kenny G, The Way You Look Tonight by Frank Sinatra and Play That Funky Music by Wild Cherry

"The wedding I saw Kevin play at was phenomenal. He wowed the crowd of about 100 people with his beautiful romantic ballads and groovy dance music. I personally know the wedding family, and heard that Kevin was easy to work with, professional, and provided all and more than was expected. I recommend him for any occasion."

"When I made my first initial call to Kevin he was warm and personable and explained every step of the process patiently and professionally. He was very accommodating to my wedding needs. Kevin is the best option if you are looking for someone that is kind, caring, and good at what he does. I highly recommend Saxophone Music San Diego!"

"If you’re looking for a live music performer in San Diego or Southern California, I highly recommend Kevin! He was very professional and sounded incredible. He began and ended at the perfect moments and volume, etc., were perfect without any adjustments! Exactly what you need for an event and especially the wedding I attended with him!"